This exciting news about sandhill cranes taking up residence in the salt marshes between Nova Scotia and New Brunswick sends me back today to Kevin Irie's luminous book of poems, The Tantramar Re-vision (McGill-Queen's, 2021).

In these poems, instances of the extraordinary sometimes leap, sometimes slide into a landscape of shifting moods.

Something moves downstream
past thinking of us:

Encounters are as likely to be with conundrums and meditative correspondences as with things.

How did it end as
a small dark brush
sweeping the earth
up into a stillness
like an answer
giving silence a turn?
...
The quiet that covers
a crow's severed wing
like a tarp laid over a bier.

Language is precise and expansive, as though it is itself watching and walking through the marshes. John Thompson's Stilt Jack runs beneath the poems as an aquifer of poetic energy.

Haven't I moved though life
like heat through dry grass,
unseen but everywhere
Basho visits,
Even Basho couldn't escape from fleas and lice
when he lay down in the dark.
Centuries later, they're still on the page.
A flow of ink kept them alive.
and weather,
The compulsion of snow
to keep on rising.
To descend as
tiny ripped parachutes
and ecologies of the self in the world:
Twigs crack like ice breaking
beneath your boots when you've stepped
too far away from yourself
Like the cranes in the Tantramar Marshes, Kevin Irie's poems give me the sense I'm encountering a mysterious elsewhere, a mystery entirely at home. 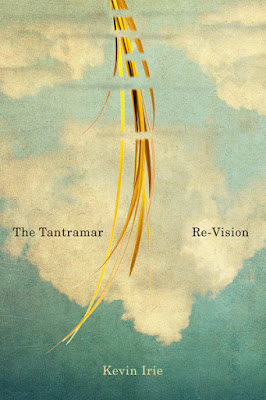 (Excerpts from "Windblown", "A Creek as Complicity, Duplicity, Daring",  "Defeated [A Confession]", "Studies in Contrast", "The Compulsion of Snow",  and "October's Meadow",  from The Tantramar Re-Vision, McGill-Queens Press, 2021)