In this post, Concrete & River makes a brief departure from poetry to chat with Mary Soderstrom about her most recent book, CONCRETE: From Ancient Origins to a Problematic Future (Regina: University of Regina Press, 2020).

SUSAN GILLIS: Thanks, Mary, for talking about your book Concrete in this slightly unconventional context, a poetry blog. When I saw the advance notices, I couldn't resist following up with you, and I'm glad I did.

In the book's first chapter, you recount thinking and writing about roads, both literal and metaphorical, and “as one thing leads to another,” you began to consider concrete as a material. Can you pinpoint a moment you knew you were going to take concrete as the subject for a book?

MARY SODERSTROM: I came up with the idea in the fall of 2016 when I was finishing up Road through Time: The Story of Humanity on the Move. I like to have a project on the go always, and concrete seemed to be the logical next step, pun intended. It seems to me that the working title occurred to me at the same time: "Rock of Ages: How Concrete Built the World As We Know It." I really liked the word play in the title, and so did the main editor. But when the book was done, others at the publishing house argued that a different title would work better. I think you have to be a Protestant to get the semi-pun of Rock of Ages, and obviously there are a lot of potential readers out there who wouldn't have the cultural baggage to get the joke.

SG: The central chapters are titled Earth, Fire, Water, and Air. How did you decide to shape the book around the classical four elements?

MS: This was one of the things that took the longest to arrive at. As it turns out, not only does each of these things go into making concrete, concrete is essential to their modern use.

Take water for example: concrete is composed of up of about 30 per cent water, while the material is essential for producing the pipes, canals, dams that make water available for our use. Try to imagine a world without hydroelectricity, or drinking water piped long distances, or crops irrigated by water flowing hundreds of kilometres through concrete canals, and you get the connection.

As for earth--well, that's where all the raw materials come from. There's a reason why contractors and engineers sometimes call concrete "mud." Furthermore, the story of the various, sometimes slap dash experiments leading up to modern concrete frequently resemble a how-to journal for making mud pies.

Fire is linked to concrete in several ways. First, fire is essential for its manufacture, and secondly concrete has been and is intimately connected to war. But also, for the last century concrete has been used all over the world to build millions upon millions of dwellings that range from do-it-yourself hovels to luxury apartment towers where our home fires burn, literally or metaphorically .

Lastly, concrete has two important connections with air. The first is as tangible, physical, and measurable: the effects on the planet’s atmosphere of making and using concrete. The second is metaphoric, and follows from the fact that the human spirit sometimes seems as insubstantial as air: it is what concrete, that wonderful, surprising material, can call forth from our souls.

SG: There’s a lyrical beauty in many of the book’s photographs, most of which were taken by you. Did you ever struggle over which path, writer or photographer, to follow in your professional creative life?

MS: Wow! I'm very flattered by this question. I've taken photos for a long time but mainly as documentation, just things to jog my memory after the fact. Using them in books is somewhat of an after-thought in fact. What I actually considered becoming was a biologist, but my first year at university I realized two weeks into the first term that I was going to flunk calculus, so I changed my path quite quickly. The result was a BA in English literature and hours and hours spent on the student newspaper.

SG: Many of your images convey a kind of intimacy, even in massive industrial sites. How do you do that?

MS: Really can't say. I just take pix! The nice thing about a digital camera is that you can take many, many photos without worrying about processing them. If you take enough, you generally come up with something half way decent.

SG: Does the odour of concrete spark anything for you? For me it’s a bit like Proust’s famous madeleine. Or if not the odour, then its texture or some other sensory attribute?

MS: Actually, the nearest thing is the slightly damp smell of a concrete basement that sends me back to my grandmother's house. It had shelves of interesting jars of canned fruit--always a treat--and we kids played there on really hot days. But the smell, I learned later, isn't concrete but aspergillus, a fungus some species of which can be quite dangerous when inhaled. I don't think that was the case in her basement though, since none of us ever had asthma attacks or whatever after a visit there.

SG: The narrative artfully weaves together politics, history, economics, urban planning and design, installation art, architecture, earth sciences, and other related ecologies. Which of these lines of inquiry was, or were, most surprising to you?

MS: I think the most surprising thing about the whole project was discovering just how dangerous concrete is--and also how dependent on it we are. Concrete was the building material of choice in one of the great innovations in housing in the middle of the 20th century--the high rise apartment block. While there were some before World War II--Stockholm built a few in the 1930s and in the 1920s Swiss architect Le Corbusier was ready to pull down all the centre of Paris to rebuild it with high rises--after the War the concrete "tower in the park" model was transplanted around the world with very mixed results. The first residents often were delighted to have clean, well-lighted places to live in, but unless carefully maintained the buildings almost universally deteriorated. Those built to house the poorest of a community have sometimes become so decrepit that they had to be torn down before they were 25 years old. Nevertheless high rise blocks have been championed as the only way to provide housing for ordinary folk while avoiding suburban sprawl.

This is nonsense, because you can have decent housing and high urban densities through housing with a much lower profile: the many neighbourhoods of attached two and three story buildings built at the beginning of the 20th century in many cities are a good example.  Concrete is used in this kind of construction, but because it is built with wood framing, the amount of concrete used is much less.

SG: And what was most challenging?

MS: Getting the chemistry and other technical details right.

SG: One of the many felicitous turns of phrase that struck me: “how hard it is to make concrete something as seemingly substantial as air.” How did you get to this lovely sentence? It seems it could equally well refer to the process of writing a book. Do you remember when it occurred to you?

MS: There are moments when you're on a roll when writing and one thing literally leads to the other. I don't remember exactly when the phrase occurred to me, but I was pleased when it "showed up." Sometimes, though, those moments when words just appear are not nearly as wonderful as you might think at first. One of the metaphors I most liked when writing Frenemy Nations compares the difficulties of uncovering the past with "trying to knit with telephone poles." Nobody else has ever commented on it, so I guess it really isn't as clever as I'd like to think.


SG: Haha--as a non-knitter, I totally relate to that comparison. Another sentence from Concrete that struck me, this one for its directness, occurs in your account of visiting the Hoover Dam in 2017: “Many of the people involved in construction are good old boys.” You don’t shy from clear statements of political and ideological position in this book. Was that at all a decision you deliberated over, or was it an intention from the beginning?

SG: We share, if I'm reading correctly, an admiration for the vision embodied in Moshe Safdie’s Habitat 67, which you write about in the book, even though that project only partially realizes it. How much of the excitement and interest around projects like that one is directly related to the properties of the material itself? Does concrete allow for ingenuity and invention in a way that is different from other materials?

Also, the location of Habitat 67 at the precise point where rapids make the river impassible takes on a symbolic dimension in the book’s final chapter. You make a case there for what can’t, or shouldn’t, be “tamed.” Would you speak a little more here about that, and how you see the future of concrete in that context?

MS: Concrete, like fire, is extremely useful, but it also should be treated with great care.

We will continue to use it for big and small projects, but it is important to realize that both the CO2 that its manufacture releases into the atmosphere and the kind of world it builds are damaging our planet. Rising sea levels are inevitable even if we are able to cut back on CO2 emissions significantly. Responding to the threat of drowned cities is going to be very difficult, particularly since the instinct in the developed world will be to use concrete to protect them with things like breakwaters.

What we can do is the subject of my next book project, tentatively called "Against the Sea: Saving Civilizations from Rising Oceans." I will look at what humans have done in the past (and seas have been rising since the time anatomically modern humans began to venture out of East Africa,) and what we might do in the near future.

SG: I'll look forward to that! Thank you, Mary, it's been fascinating to learn about concrete with you.

Mary Soderstrom's CONCRETE is available to order in hardcover and paper from University of Regina Press and your favorite bookstores. For a preview, check out Mary's YouTube video! 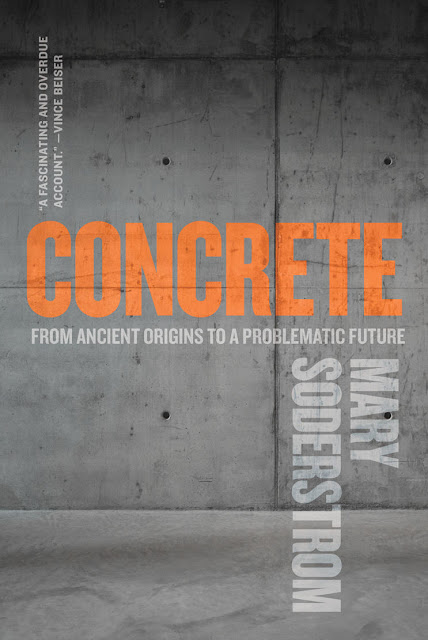