EAVAN BOLAND: WHAT LANGUAGE DID 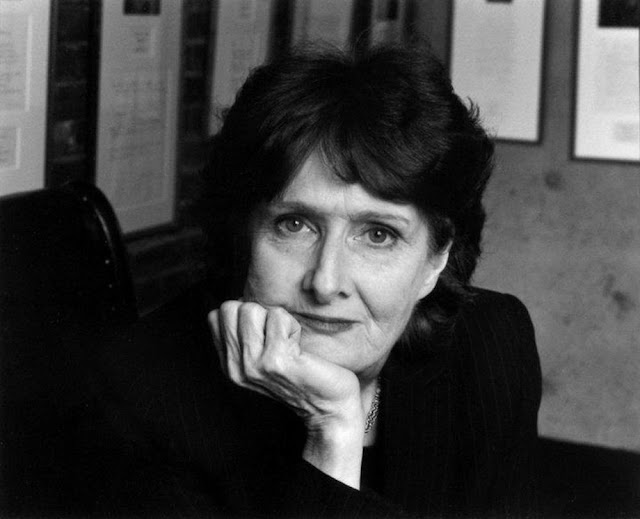 Eavan Boland
WHAT LANGUAGE DID


The evening was the same as any other.
I came out and stood on the step.
The suburb was closed in the weather

of an early spring and the shallow tips
and washed-out yellows of narcissi
resisted dusk. And crocuses and snowdrops.

I stood there and felt melancholy
of growing older in such a season,
when all I could be certain of was simply

in this time of fragrance and refrain,
whatever else might flower before the fruit,
and be renewed, I would not. Not again.

A car splashed by in the twilight.
Peat smoke stayed in the windless
air overhead and I might have missed it:

a presence. Suddenly. In the very place
where I would stand in other dusks, and look
to pick out my child from the distance,

was a shepherdess, her smile cracked,
her arm injured from the mantelpieces
and pastorals where she posed with her crook.

Then I turned and saw in the spaces
of the night sky constellations appear,
one by one, over roof-tops and houses,

and Cassiopeia trapped: stabbed where
her thigh met her groin and her hand
her glittering wrist, with the pin-point of a star.

And by the road where rain made standing
pools of water beneath cherry trees,
and blossoms swam on their images,

was a mermaid with invented tresses,
her breasts printed with the salt of it and all
the desolation of the North Sea in her face.

I went nearer. They were disappearing.
Dusk had turned to night but in the air--
did I imagine it?--a voice was saying:

This is what language did to us. Here
is the wound, the silence, the wretchedness
of tides and hillsides and stars where

we languish in a grammar of sighs,
in the high-minded search for euphony,
in the midnight rhetoric of poesie.

We cannot sweat here. Our skin is icy.
We cannot breed here. Our wombs are empty.
Help us to escape youth and beauty.

Write us out of the poem. Make us human
in cadences of change and mortal pain
and words we can grow old and die in.

(from In a Time of Violence)