Kyeren Regehr writes: This was the first poem I wrote about the ashram, I penned it on back of an envelope at a coffee shop, and it basically opened the floodgates to the book that was waiting inside my subconscious.
The Guru’s Feet

Today The Master’s socks don’t match. Same shade of washed-out denim, but one sock’s thinly ribbed and the other’s a pearl weave. I’m on my knees in the main foyer, and His toes almost touch my jeans. He’s laughing with Cliff—my shoulder blade rests against Cliff’s shin. Cliff’s a psychiatrist, but everyone calls for prescriptions like he’s a GP. He wrote up antibiotics for my abscessed tooth, birth control for Lorelei. Everyone crowds in until I’m twelve o’clock in a circle around The Master. He tickles the top of my head, lazily, almost sensually, so I have no idea what He’s saying. My head’s sparking and His flat Chicago accent umbrellas me.

Then He springs back and the circle widens. He pinches the fabric of His jeans at the thighs and hikes them mid-calf, skips toodle-oo backwards down the hall, blue peepers and baldy head shining. The crowd peels, bodies press against walls to make room, everyone whooping with glee, cheering His veiny-legged jig as if He’s Lord of the Dance. He casually whacks Yasmyn on the crown as he passes; Yasmyn, with wild hair extensions and her one-note Billie Holiday scream. Her irises slot-machine and she sinks to her knees, braids in a Medusa-gyre. Those either side get off on her light-climax, one eye on Him, hoping He’ll spot how worthy they are, burn them with shaktipat too. But now He’s playing silly faces with Athena. They were supposedly screwing in the early days, but I’ve barely been here a year so I don’t know much about anything.

He giddy-ups, His mis-matched feet hitch-stepping towards the Satsang room where He’ll recline in His La-Z-Boy, perform for the sheeping crowd. He’s mumbling something about string theory, and I’ve no idea what, because I’m stretched onto my toes, noodle-thin, mind emptying, arms lifting. I trip forward, wayward as a wind-born chip packet, my toes catching each kink in the carpet, on course to His feet.

Kyeren Regehr's readings from Cult Life in Calgary, Edmonton and Victoria have been cancelled. Her book is available from Munro's Books in Victoria and direct from Pedlar Press. 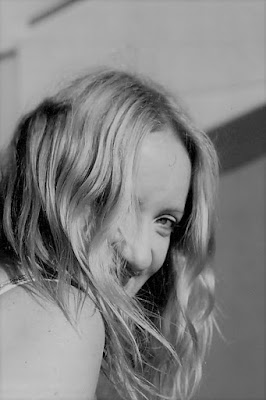