- February 13, 2020
Jami Macarty on birds, the colour yellow, and being and presence in poetry.
SUSAN GILLIS: What brought you to poetry -- or poetry to you?

JAMI MACARTY: Wow! From my point of view, this is a rather deep, philosophical question. Who knows? What brings us to anything? Are we brought to things or do we bring things to us? Buddhist teachings would say that though it seems like things are coming to us, we are giving our attention to things. Ultimately, it’s a mystery, is it not? To play along, I’ll riff on some instances of people who “brought” poetry to me. Mrs. (Betty) Towle, my third grade teacher, required students to memorize and then recite a poem in class. I chose Robert Louis Stevenson’s “Time to Rise” from A Child’s Garden of Verses:

A birdie with a yellow bill
Hopped upon the window sill.
Cocked his shiny eye and said :
‘Ain’t you ’shamed, you sleepy-head ?’

The quatrain’s last line still reminds itself to me on occasion. The poem contains other elements that have remained with me: bird, yellow. I’ve always liked yellow. The yellow of Vincent van Gogh’s paintings “Vase with Fifteen Sunflowers” and “Wheatfield with Crows,” both also introduced to me by Mrs. Towle. Robert Hass’s poem “The Yellow Bicycle” is a long-time favorite; it contains the elements of a perfect poem, as far as I’m concerned.

I wrote an entire poem (Mind of Spring, winner of the 2017 Vallum Chapbook Award) about yellow—the yellow blossoms of Arizona State Tree, the palo verde. Was it Robert Louis Stevenson’s poem that led me to collect poems in which color factors prominently, e.g. James Tate’s “The Blue Booby” and Wallace Stevens’s “Thirteen Ways of Looking at a Blackbird”? Maybe. Hass’s lines from “The Yellow Bicycle” --

Her song to the yellow bicycle:
The boats on the bay
have nothing on you,
my swan, my sleek one!

Tate’s and Stevens’ poems focus to some extent on birds. Practically every bird and everything about
birds fascinates me. Nearly every poem in my forthcoming book, The Minuses, has a bird flying or perched in it. Birds are teachers.

Another human teacher, Mr. (John) Herrick, brought poetry to me during high school. In his senior elective on poetry, he introduced students to a variety of poetic forms. I wrote my first villanelle in that course.

Other than these two memorable teachers, I’ll offer that perhaps my quiet, shy kid-self found solace in the pages of my journals—I favored 6 x 4 corduroy-covered journals back then—which I started keeping when I was nine—for company. The dimensions of the journal pages dictated a line length for which I still have a penchant. As I think back, I’m aware that I was concerned with who might find and read the journal. To me, line length and consideration of the reader suggest the presence of a writer.

SG: The last line of the Stevenson poem you quote, " 'Ain't you 'shamed, you sleepy-head ?' " sounds like it should be in a song recorded by Nina Simone or another of those great 20th-century divas. I love how you say it reminds itself to you sometimes.

JM: Cool! You’re keying into the rhythm of the poem with me. I bet that’s what attracted my little girl ears to it in the first place. Though I didn’t know Nina Simone then, I can hear the line in her gorgeous voice now. O, how about the line sung by Dinah Washington, my very favorite Jazz/ Blues singer. And, Annie Lennox; she’d do something special with the line, too.

SG: As I read around in your work, I notice that some of your poems have a relaxed economy of language that isn't unlike that Stevenson line, while others challenge it with a certain spare ferocity. Some of your short poems share certain qualities of immediacy and concision with haiku; compact narratives thread through some of the longer ones. Notably, there's the close attention you give the visible, peopled world. But sometimes what readers see is different from what we are attending to in our making. How does this reading seem to you?

JM: To be honest with you, I bristle at these types of descriptions about poems—mine or anyone else’s. To me, they feel limited, reductive, and superficial. And, yet, I’m interested in economy, concision, and precision of language. Haiku, really? I wonder what specifically is making you think of the Japanese form in relation to my poems. I appreciate “spare ferocity,” because it has the feeling of coming from your personal, intimate engagement with the poems. 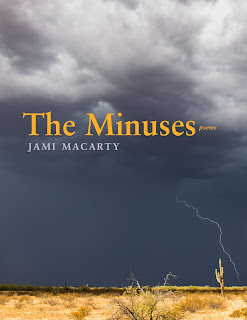 SG: The Minuses has been described as ecofeminist. In that light, the Stevenson verse you cite in part one starts to feel more formative than at first it might seem, more like an object lesson to be questioned. Is ecofeminism a place/stance you set out from as you write, or somewhere you want your work to go? Is it a way of getting somewhere? A way of seeing/being?

JM: Ah-ha! Yes, I’m there with you, feeling the same formative power of the Stevenson verse. Surprising, exciting! For sure, my life is and maybe has always been inquiry-based; inquiry is also the basis of the form of meditation I practice. So, it makes sense to me that I would question the position of the speaker within Stevenson. There’s something there in that last line, something, a quality that keeps arising in my field of attention. OK, bear with me as I go there, give myself over to the feeling that’s here.

As I pay attention to my body’s response to the line’s diction and tone, I note a cower and a cringe. As I follow those physical sensations, there’s the sense that the line talks down, seems to point and wag a finger. The personal comes in. I don’t like to be talked down to. I don’t like a finger pointed at me. As I pull back, there’s the awareness of the questioning of that hierarchal, power-based mode of communication. I note, it feels gendered to me. I suppose that’s because I’m positioning myself as the one being spoken to, the one being “shamed.” Stevenson’s bird shames, but birds don’t shame. People shame. I sense now a disagreement with that line in the poem. It’s against my belief system, which seeks to speak up to hierarchy and those who would shame. As I think about the logic of the line, I dispute it—what shame is there in being a “sleepy-head”? Now, at this point it time, I align more to lines in Wallace Stevens’ “Thirteen Ways of Looking at a Blackbird”:

a woman and a blackbird
Are one.

That’s a feminist response. That’s an ecological response. An ecofeminist response. I suppose it’s a stance, but one that’s in this now, arrived at out of this present moment of being with the feeling the Stevenson and Stevens lines cast within me. I haven’t set out to be feminist, I just am. I haven’t set out to be ecologically- or environmentally-minded. I just am. Rather than willful positionings, these are natural inclinations, arising out of my being. Of course, we could kick around their origins, which to some degree likely took root in experience.

As to the poems in The Minuses. After the fact of the poem’s composition, after the fact of the getting-to-know-you revision process of the poems, I recognized their underlying philosophy and concerns as ecofeminist. Now, I would describe the poems as having a place, as being located in ecofeminist aesthetics. It interests me to consider what it would be like to set out to write from an ecofeminist or any other stance. To be honest, I draw a blank. How is it done? For me, starting there—from an established stance—suggests a focus on product, and therefore, the absence of the organic and intuitive within the composition process.

I believe in the composition process, and trusting it, I give myself over to it. I start with an impulse to bring to language, to articulate the felt sense. In so many ways, ‘I’ (the poet) don’t matter within the composition process. It’s language that matters. Where I want to go in my writing is where language wants to go. Rather than requiring language to follow my will, I follow the will of language.

JM: Generally, these days inspire me. Everything that arises within me and the day inspires me toward articulation. Specifically, feminist, ecological, and spiritual inquiry.

Jami Macarty is the author of The Minuses (Center for Literary Publishing at Colordao State University, University Press of Colorado, 2020), Instinctive Acts (Nomados Literary Publishing, 2018), Mind of Spring (Vallum, 2017), and Landscape of The Wait (Finishing Line Press, 2017). Co-founder and editor of The Maynard, she teaches poetry at Simon Fraser University. Visit https://jamimacarty.com/ Read Jami Macarty's poem “By Virtue of And"