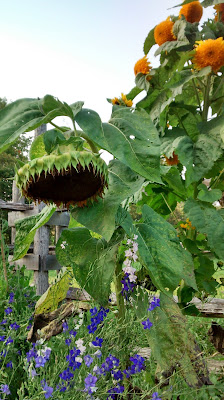 I go,
you stay;
two autumns.

How well I know it!

Its simple arithmetic of movement and stasis neatly sums up the late Augusts of my last twenty or so years: summer comes to a close; I leave my partner and rural home and writing life for the city and my teaching job.

Now, though, I've left that job, and for the first time in a long time I experience autumn in increments instead of decisive dates. Small pockets of shadow in a warm garden, a pinkish hue in the woods, fruit fallen from trees. Bear scat close to the fence. Look, a dragonfly! We'd thought they were gone. Writing no longer happens in the off-season, in a second home. It happens, or doesn't, period. What will that be like?

Buson's poem speaks directly, and deftly, of parting: friends, perhaps, or lovers. The separation itself becomes a form of autumn -- or rather two forms, for the person who goes has a different experience of separation from the one who stays. And couldn't the I and the you be the same person, youth falling back, age moving in?

I haven't read a lot of Buson. Generally among the classical haiku masters I've been more drawn to the sharp turns of Issa and resonant depths of Basho. (Robert Hass's The Essential Haiku, where this Buson poem is from, has been a favorite source.)

Crossing the autumn moor --
I keep hearing
someone behind me!

Seeing people off,
being seen off --
autumn in Kiso.

Loss, diminishment, drawing in: the genre of autumn poems isn't confined to haiku. To catalogue a very few others: Jean Valentine's "October Premonition," the same author's "October morning", both also recently shared by Singer (whose regular posting of poems and excerpts from poets' letters, diaries, etc, is one of the best things in my social media); whole families of Keatsian mists and mellow fruitfulness; the autumn leaf-burning that pervades the pages of Louise Glück's A Village Life:

The fire burns up into the clear sky,
eager and furious, like an animal trying to get free,
to run wild as nature intended --

And the shiver (I see it in yellow aspen leaves across the pond) that is Alice Oswald's luminous poem, "Almost as Transparent." Listen as she observes the birches: "And all those half-finished half-beginnings of forms, being made of both the clarity and ambiguity of autumn, could not have been more tree-like. No human could grow like that: the more upright, the less certain."

From this stance of wonder, the poem moves to a transformation in which the human, herself made of clarity and ambiguity, "vitrified," could not be more tree-like. 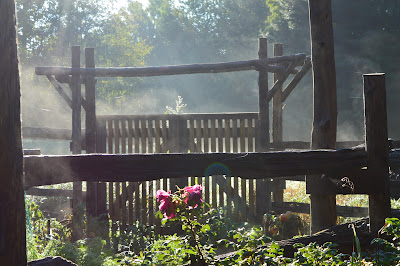 I go and I stay, two autumns.