SOLASTALGIA AND "THE SNOW MAN"

I woke before dawn to distant low rumbling and a whistle, faint and attenuated: the early freight train moving through the valley. Snow had fallen overnight, enough to insulate the house a little and to reveal the tracks of creatures that move around outside it: squirrels, wild turkeys, propane delivery truck, us.

"One must have a mind of winter," goes Wallace Stevens' poem "The Snow Man", to meet its beauty -- "junipers shagged with ice," "distant glitter," the sound of wind in dry leaves -- and not to "think / Of any misery" there.

I could say the passing train sounded lonely, or cold, or plangent. It did stir those feelings. I could note that the snow over the chrysanthemums struck some grief-chord that chrysanthemums without a snow cover don't.

Cultivating a mind of winter in our era, the sixth great species extinction, might be useful. Every day we learn of more loss. Many of us are experiencing solastalgia, distress caused by environmental change, a boundless grief for past and future, and seeking ways to cope with it, feeling helpless.

To "behold / Nothing that is not there," Stevens writes, one must quiet the imagination and allow oneself to become "nothing," part of "the nothing that is." That's one mind of winter.

Then from there, from the other mind of winter, to act.

I watched the sun appear through thin trees. In a few minutes it was strong. The white field sparkled in its light. Already the house was becoming warm. 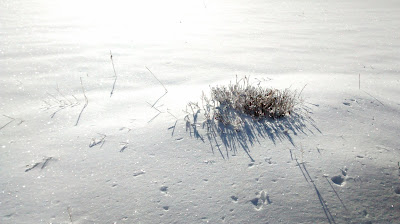