WHAT TO SAY FROM OUR LUSH LIFE: TWO POEMS BY JOHN DONLAN 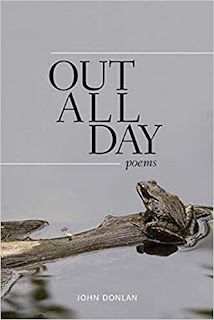 South Frontenac’s muggy nights in June are thick
with sex and death; on Highway 38
teenagers race the black future
beyond their cars’ twin antennae of light

where frog-dotted asphalt slices the marsh
and the dark pulses with ephemerae
whose day this is to fly and mate and die;
exoskeletons tick against the glass

that curves to shield these children covertly
glancing by dash light at faces, bodies
who never again will feel so much as now
and we cooler at heart

half-remembering, dream them safe to bed.
Sunday morning in the wrecker’s yard
a chipping sparrow picks bugs off the grill
of a Dodge Ram 1500 truck.

End of July, trees call it a season
shut down their green workshops and let them rust.
Bumper cars in water dimples, whirligig
beetles zoom and carom, rippling moonlight.

Perseids sing their fire songs
as they streak our black stadium, burning up
into atoms of atmosphere.
Crickets begin, and a thousand insect voices

(scraping legs are a voice), and deer mice trill
high urgent love calls from the trees.
On an outflung arm of the Milky Way
we wonder what to do and what to say

from our lush life, so postmodern, so free
to equal their conviction, their necessity.
Long past moonset we lie outside and listen
and stare up into the star-hazy night.

John Donlan's most recent collection of poetry is Out All Day (Ronsdale Press). "South Frontenac" and "Whirligig" appear on this page by permission of the author.