Groping back to bed after a piss
I part thick curtains, and am startled by
The rapid clouds, the moon’s cleanliness.

Four o’clock: wedge-shadowed gardens lie
Under a cavernous, a wind-picked sky.
There’s something laughable about this,

High and preposterous and separate –
Lozenge of love!  Medallion of art!
O wolves of memory! Immensements!  No,

One shivers slightly, looking up there.
The hardness and the brightness and the plain
Far-reaching singleness of that wide stare

Is a reminder of the strength and pain
Of being young; that it can’t come again
But is for others undiminished somewhere. 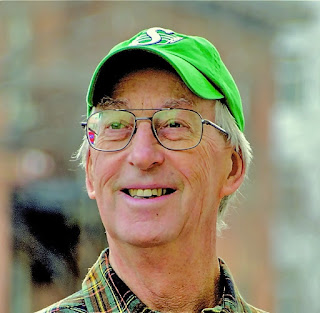 Larkin's title refers to Sir Philip Sidney’s sonnet from “Astrophil and Stella”, beginning  “With how sad steps, O Moone, thou climb’st the skies”, in which the moon is portrayed as a lover spurned by ladies of the court. Larkin says, “The connection between 'Sad Steps' is tenuous in the extreme – I suppose I just thought it a good idea at the time. It wasn’t. My poem has nothing to do with love, or disdainful beauties, or anything like that.”

In fact Larkin takes considerable pains to strip this moon poem of the genre’s usual poetic baggage. His parody of
the hyperbolic diction (“Immensements!”) of French poets (he loved mocking foreigners) is immediately contradicted by the actual, the real: “No,/ One shivers slightly, looking up there.”

It is, for him, an unusually kind and optimistic poem. His imagining the young looking at the moon, somewhere, is reminiscent of “The Whitsun Weddings”, with its shower of arrows “somewhere becoming rain”. In both he overcomes his usual exquisite self-absorption and takes comfort in the happiness of others. For the man who said, “Disappointment is to me what daffodils were to Wordsworth,” this is an unusual and heartening departure.

Despite his feints at plain speaking and earthy realities (“groping back to bed after a piss)” he recreates in us the transcendent, other-worldly awe of moon-viewing.

John Donlan’s collections of poetry are Domestic Economy, Baysville, Green Man, Spirit Engine, Call Me the Breeze, and Out All Day. He was the 2012-2013 Barbara Moon Editorial Fellow at Massey College, University of Toronto, the 2014-2015 Writer in Residence at Saskatoon Public Library, and the 2016-17 Haig-Brown Writer in Residence in Campbell River.

Philip Larkin's poem is from The Complete Poems of Philip Larkin, edited with an introduction and commentary by Archie Burnett, published by Faber and Faber, 2014.