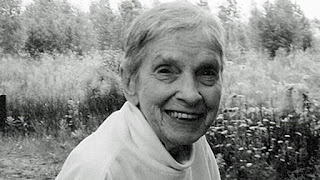 Myself and "The Two Selves"

Stephanie Bolster writes: I began this piece (from The New Quarterly, 1999) by noting a few references to Margaret Avison I'd come across at the time. Twenty years on, I've experienced the same thing over these past few months. Interesting that I discovered the poem at 18, wrote about it a decade later, and reconsidered it two decades after that. I include the essay here as is, an archival piece. An odd recent discovery is that the poem was inexplicably left out of Always Now, the first volume of Avison's Collected, even though it appeared in her first book. 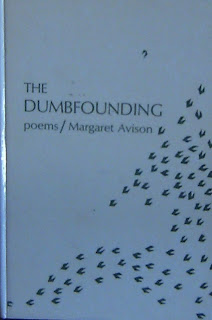 The Two Selves
All the cages are empty
and crusted dry.
Why do they hang from
your lintel and ceiling?

The birds in the sky
left this to me.

But your room is bare
as a customs shed,
and the cages at head-
level swivel, and there
is no escritoire....

No, only a linen sky
and a bicycle-tree
somewhere, for me.

Your Philip Sparrow
scribbles his tracks
in the waterfront soot at
a warehouse door.

That one? Maybe—
there were many
who flickered away.

And you wait for them here?

Oh no. It is more
like knowing the sound of the sea when you
live under the sea.
—Margaret Avison


Recently, a few references to Margaret Avison in the space of several days prompted me to return to "The Two Selves" after years away. I see now why I was so enamoured of this poem when I discovered it at eighteen during my first university poetry class; its playful, self-absorbed strangeness resonates particularly with adolescence. The exchange between one self and another (which I still read as an exchange between two parts of one individual), the literary name-dropping (Philip Sparrow) and language-leaping (escritoire), and the evasions, all struck me as the sorts of things possible only in poetry. I returned to the poem often, as a trigger for my own writing or simply to remind myself that poetry was possible.

Looking at it now, I see rhymes to which I was oblivious ten years ago in my devotion to free verse, and a care in word choice that must be a mark of deliberation, rather than inspiration as I thought then. (I hardly revised my own poems at the time, so didn't quite believe that anyone else did. Writing wasn't yet work for me.) The phrases "crusted dry," "head-/level swivel," "linen sky," "scribbles his tracks" give the poem texture and save it from being simply a mystical ramble. Avison's delight in language as language makes me eager to use "lintel," "escritoire," and "bicycle-tree" in poems of my own. Her placing of incongruous objects within one space reminds me of Joseph Cornell's boxes; the space within which all of these things/words can exist together in the poem, and the poem alone. The poem doesn't simply inhabit a space, it creates one.

The final stanza—which gives me shivers undiminished after all this time—has the same effect as Emily Dickinson's "and then/I could not see to see—" which Avison may be echoing. That is, it makes both perfect sense and no sense at all. This is perhaps what I most adore about Avison's poem: she doesn't concern herself with logical clarity but lets the language remain in control, and so makes a deeper kind of sense. I'm as reluctant now to explain what I mean by "a deeper kind of sense" as I was at eighteen. Perhaps the poem works this way: repetitions like Avison's "sea" and "sea," and particularly Dickinson's "see" and "see," set the logical part of the mind to work trying to figure them out, and while that tangling and untangling is going on offstage, intuition is left free to take over. But more likely it's the reverse. Like the rhymed couplet that completes a Shakespearean sonnet, the repetition is so lyrically tidy and familiar that it convinces the intuitive part of the mind that the poem is done and has closed itself off—which makes the intellect's split-second-later discovery of logical complexity (and the resultant spiraling back into the poem, and outwards from it) all the more startling and compelling.

Every now and then I write a poem that I can't entirely explain, even to myself. These poems rarely find their way to other eyes, because, well, they don't feel earned or refined enough. They don't fit alongside my other work. "Imminent..." is one such poem. I wrote it with Sylvia Plath inhabiting my head, but now I see how present Avison was, too. I wish I wrote more poems like this; most of the time, I think too much. Too few poems these days abandon sense, however briefly, to mean something inexplicable. Perhaps we're all writing poems like this, but fear giving them over to the world? Write first, think later. When I need to remind myself of this, I return to "The Two Selves."

Ten years since she came with her turned-away face.
She had just killed herself and wanted me
to tell her I was sorry. I did. Could've done myself in

to match her but instead caught her afterdeath rash,
spent some time in bed. That light sickly through sheets
and unflowered sills. My hands left blood

smears on the pages and between the sheets.
She wore a scarf around her head to keep it on.
Some nights she threatened to undo it, loosened just

the first knot. Once I offered to help her
and she cried out, ecstatic. I had not known
we had been married. She waits a lot.

By the door or on the windowledge, her feet
tempting the postman. Until now I could not admit
this jealousy of his tongue on her painted toes.

What I would give for a smudge on her cheek,
food caught on her eyetooth. When I once
lost myself it was her mouth's glint that helped

find me, loose in the corner where the mouse had been.
It was not a happy accident. And through all of this
while the world bloomed outside I cannot say

I loved her, though once planted my hand
between her arm and breast and felt a beating there.
She'd come for something lost and soon gave up.

As for myself, there was never anything else to want.
One of these days, spots will bubble up
on the backs of her hands. That will be something.

This essay and the accompanying poem first appeared in The New Quarterly in 1999. They are reproduced here by kind permission of the author. Read Stephanie Bolster's brilliant meditation on what a writing day might look like at my (small press) writing day, our conversation on aboutness, and her poem Tapestry, the Cloisters.
Margaret Avison Poetry Month Stephanie Bolster