What did I love about killing the chickens?  Let me start
with the drive to the farm as darkness
was sinking back into the earth.
The road damp and shining like the snail’s silver
ribbon and the orchard

with its bony branches. I loved the yellow rubber
aprons and the way Janet knotted my broken strap.
And the stainless-steel altars
we bleached, Brian sharpening
the knives, testing the edge on his thumbnail. All eighty-eight Cornish
hens huddled in their crates. Wrapping my palms around
their white wings, lowering them into the tapered urn.
Some seemed unwitting as the world narrowed;
some cackled and fluttered; some struggled.
I gathered each one, tucked her bright feet,
drew her head through the kill cone’s sharp collar,
her keratin beak and the rumpled red vascular comb
that once kept her cool as she pecked in her mansion of grass.
I didn’t look into those stone eyes. I didn’t ask forgiveness.
I slid the blade between the feathers
and made quick crescent cuts, severing
the arteries just under the jaw. Blood like liquor
pouring out of the bottle. When I see the nub of heart later,
it’s hard to believe such a small star could flare
like that. I lifted each body, bathing it in heated water
until the scaly membrane of the shanks
sloughed off under my thumb.
And after they were tossed in the large plucking drum
I loved the newly naked birds. Sundering
the heads and feet neatly at the joints, a poor
man’s riches for golden stock. Slitting a fissure
reaching into the chamber,
freeing the organs, the spill of intestines, blue-tinged gizzard,
the small purses of lungs, the royal hearts,
easing the floppy liver, carefully, from the green gall bladder,
its bitter bile. And the fascia unfurling
like a transparent fan. When I tug the esophagus
down through the neck, I love the suck and release
as it lets go. Then slicing off the anus with its gray pearl
of shit. Over and over, my hands explore
each cave, learning to see with my fingertips. Like a traveller
in a foreign country, entering church after church.
In every one the same figures of the Madonna, Christ on the Cross,
which I’d always thought was gore
until Marie said to her it was tender,
the most tender image, every saint and political prisoner,
every jailed poet and burning monk.
But though I have all the time in the world
to think thoughts like this, I don’t.
I’m empty as I rinse each carcass,
and this is what I love most.
It’s like when the refrigerator turns off and you hear
the silence. As the sun rose higher
we shed our sweatshirts and moved the coolers into the shade,
but, other than that, no time passed.
I didn’t get hungry. I didn’t want to stop.
I was breathing from some bright reserve.
We twisted each pullet into plastic, iced and loaded them in the cars.
I loved the truth. Even in just this one thing:
looking straight at the terrible,
one-sided accord we make with the living of this world.
At the end, we scoured the tables, hosed the dried blood,
the stain blossoming through the water.


SARAH VENART writes:
What I love about "What Did I Love" by Ellen Bass is firstly the familiarity of the poem.  I feel so intimately sure she is sharing this poem with only me, you know?  There is no sense of an awareness of an audience bigger than one.  Also, there is nothing forced or trying in the tone.  I get the sense that I'd really like Bass in person because, hey, she's telling me her deep enjoyment in killing an animal.  And because I grew up on a farm myself, I get that satisfaction in the cull, in the actions of the cull, and then what you do with the body to make it food.  I also feel like Bass is taking me by the arm and saying, "Slow your roll, lady.  Look here.  This is life becoming more than life."  It's that noninvasive insistence Bass does: she is saying, like, appreciate this animal becoming --through this practical everyday practice-- meat or nourishment or an enriched self or whatever.  And Bass isn't getting high and mighty, which I appreciate.  It's such a simple poem: each step in the killing held in place by its image.  I love it.  That's it. 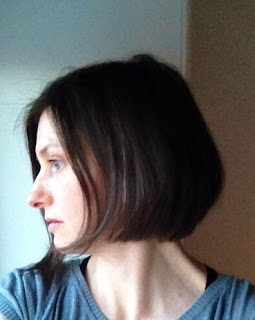