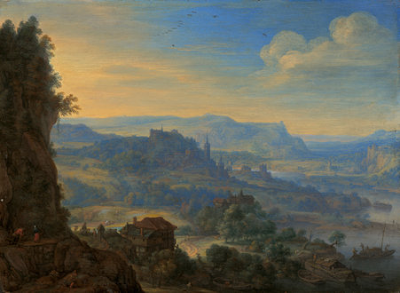 Also, I had a dream, about a year and a half ago, that I read a poem called "The Surveyors," and it was by you. Does this poem exist? I cannot remember any of the words, only that there were all four seasons in it, and that there were nice descriptions of a chain being made taut, the running out of the chain, over and over...

for Matthew Yeager, who wrote me this letter

Dear Matt,
I'm sorry to say "The Surveyors" does not exist,
despite my being haunted by your question
for a long while now, imagining time and again
that the past can change; that the poem is on the list
of things I did once, because you dreamed it of me.
It's true, I regret, I've never put all four
seasons into one poem, though the Shakespeare
sonnet I love most keenly, 73
("That time of year thou may'st in me behold"),
implies them, and I wish I'd made a gesture
at least of homage. But when I read your letter
in the autumn of my life, I felt no cold;
I heard Vivaldi's "Spring" scrape violins
over and over, like the running out of chains.

"Over and over, like the running out of chains"--
I've already quoted wrong the thing you said,
not being you. I can't be in your head.
You can't follow me back there, hearing strains
of Vivaldi in cafes. America
had just learned cappuccino, and to say
croissant, not Danish; we went for those parfait
glasses of yogurt, with strata of granola.
I was so new. The year was '73
or maybe '72. It doesn't matter.
I had discovered sex and poetry.
Thinking of either one would make me shudder.
I was happy. I was nervous about exams.
I was going to read all the works of Henry James.

I was going to read all the works of Henry James,
but haven't. So much unfinished business
unless you're Henry James, who had time to witness
every minute of life, then record the whole, it seems.
Yes, it was thrilling art, but also bad
to make us wait so long to locate Chad
and Madame de Thing in their adulterous boat.
The Europeans or The Ambassadors --
the grandeur James could pour into a title!
That plural but hawk-like wisdom, above it all --
implied too by your title "The Surveyors."
Tripod and hard hat, compass, orange vest:
sometimes, I think, more grounded work is best,
or better than the poem you thought I wrote.

Or better than the poem you thought I wrote
is another one I never wrote: it's set
in shabby, hipster Zagreb, where my love
and I, now sixty, walked past shuttered shops
on a Sunday morning, and found ourselves in front of
the -- really? -- Museum of Broken Relationships,
which was open. Of course it was open. So we spent
time in the gift shop, where they charged the equivalent
of thirteen dollars for a little pink
eraser that would help you not to think.
RUB IT ALL OUT, it said. A pillowcase
read SLEEP IT OFF. By this age, I'd erased
much of my past quite nicely; so had he.
We walked out holding hands, a bit brokenly.

We walked out holding hands, a bit brokenly,
like Adam and Eve, in my favorite poem of all.
Milton! thou shouldst be living at this hour
but you're not, since these two made sure you were mortal.
No human, though, can dream beyond the power
of your blind omniscience; modernity
in poetry must die if you don't last.
what's more Einsteinian than Book Eleven,
Michael escorting Adam up that hill
to make their space-time survey of the past
ahead, witnessed not just in the brain
but in present action? Cain killing Abel
as the seed of countless long-dead wars, and even
while Eve has not yet given birth in pain...

While Eve has not yet given birth in pain,
I have. I try to sneak a look, like Thetis,
over the shoulder of whatever may
now forge my daughters' prospects. Surely Auden
had Milton's scene in mind when he shaped his;
what Homer saw on his word-hammered shield
had taken on the sheen of the word-field
surveyed by Adam; implied an unnamed Mary,
who knew It is written, and that she must yield.
I live for nothing more than for my children,
yet I'll confess, Matt, I know well the If
Clause of self-sabotage: If I must lose
my life, why not make this my hour to choose?
Jesus, tempted, might have jumped off the cliff.

Jesus, tempted, might have jumped. Off the cliff
is where this poem-that-isn't now must go.
Today in the paper ("the paper" has a whiff
of yesterday to it, sorry), Elon Musk
averred we might be living in a vast
computer simulation of a past
world re-created by our own descendants.
To them our metaphors can make no sense --
the summer of my life, my day at dusk...
Death, thou shalt die, said Donne. Could that be so?
The only instinct greater than survival
is, apparently, its keenest rival,
the drive to guarantee no thing's not dead.
Melt all the ice caps. Cut off every head.

Melt all the ice caps. Cut off every head

to serve the crude medieval god up there
and post the act on social media, where
all life went anyway -- into the Cloud.
Numberless universes at this minute
(though what's a minute?) may be simulcast,
we're also told, in which case nothing's lost,
yet something's deathly in the infinite:
it leaves us mortals out. What's with this glee
we humans feel, enabling the posthuman?
Doubtless we'll come to singularity
with our machines, but why must we be glad?
A life from here to there, in one direction --
oh, I was content with what I had.

Oh, I was content with what I had:
a perch on the back stoop. I'm maybe three.
This is it, Matt, my first memory.
I'm in a wool coat, tailored, double-breasted,
absurd for a toddler; but that's how things were.
The president was Dwight D. Eisenhower.
So long ago! I look down from my great
height, the fourth step of new-poured concrete,
to survey the new sod of our new backyard.
My mother is on her knees. She's working hard,
making a garden, planting flowers between
different-sized rocks. She calls it a "rock garden."
Here in Grand Rapids, people are not so grand.
My mother is making art from her plot of dirt,
Japanese art, and the neighbours won't understand.
She'll spend a lot of time feeling proud and hurt.

She'll spend a lot of time feeling proud and hurt
like her daughter. I came by it honestly,
being stung by life, soothing myself with art,
making stuff up, getting things different-sized.
You doubt my first memory? I'm not surprised.
I must have fused two scenes, since nobody,
I see now, wears a winter coat in weather
warm enough to plant flowers in. It's wrong
and the sonnet I just wrote contained sixteen
lines, which even I know is too long.
I've lived already longer than my mother
and haven't lived enough. Live all you can,
said Lambert Strether; it's a mistake not to.
Living by this is the best I think I'll do.

Living by this is the best I think I'll do,
while praying not to burden those I love.
What hope I won't? When my time comes to vault
off the bridge, I'll be a midget, bent and frail
(I'm too short, even now, to clear the rail)
and besides (will they concede it's not my fault
my brain is shot?), I won't be good for new
information, or even old stuff I believe
nobody told me. Half-deaf, paranoid
nihilist nonsense, technophobic rants,
the imagined feats of grandchildren, the round
of half-true stories run into the ground --
and gone will be Vivaldi, sex, romance,
sweet things I must remember I've enjoyed.

Sweet things. I must remember. I've enjoyed
forgetting, then remembering again,
the running out (remember, Matt, the chain
gone taut, then running out, over and over?)
of what my life is, before it meets the void.
A buried marriage. Late, my truest lover.
My children jumping too high on the bed,
landing on college campuses. Goodbye,
goodbye, walk through that gate, don't watch me cry.
Lost friends, a dozen places I called home.
I can't see all I'm seeing -- give me time!
If I wrote the poem you dreamed, would that imply
we'd finalized my list?...For now that's why,
I'm sorry to say, "The Surveyors" does not exist.

From The Surveyors (Knopf, 2017). Reproduced with permission.