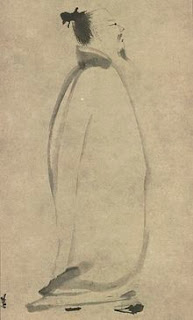 Phoebe Wang
THE CHILD-BRIDE: A LETTER
after Li Po


I saw no changes in my life
those first years of marriage, negotiated
like a trade alliance. A child in a collar
of point coupé, I shivered beside you,
smelling of stale bread, already
greying from years of tribal wars.
In three months you were back at sea
sowing my dowry like a new kind of tree.

For two years there was little news.
I slept in my usual bed.
I was fifteen when you washed up.
I masqueraded in breeches, roamed Paris
for days, watching fine ladies descending
from crested carriages. Had I no thought,
my family chorused, of their honour?

At twenty I at last agreed to sail
from Honfleur. What can I say
about the crossing? The sea couldn't bear us.
So this was a new world: the raw smell
of lumber, of pig manure in straw...
At Québec the mud lay thick, the roofs leaked,
you were mortified. I watched you
kneeling in the rows of peas, seeing what you planted.
I spoke Algonquin almost as well as you. The women
didn't ask why I carried no children of my own.
Strange what I longed for most.
Not the cobblestone beneath my rose-ribboned
shoes, nor the crowds at the concert halls --
but the refrain of women's voices, speaking
like music my mother tongue. After
I returned, you wrote, Madame
de Champlain, you are greatly missed.

After you died, I gave up the world.
Did I ever write to you of St Ursula,
who reached her fiancé in a day
by a miraculous storm? Some force
carried me toward you, then away again.
I couldn't wait.

(from Admission Requirements, M&S 2017. Used by permission)
---
Susan Gillis: I chose this poem for the way it transforms Ezra Pound's version of Li Po's "The River-Merchant's Wife: A Letter," participating in a tradition of 'translation of translation' alongside poems like George Elliott Clarke's "The River Pilgrim: A Letter," which also engages with that Pound poem. How did this poem begin for you?

Phoebe Wang: I had been reading Champlain's biography as research for "Portage" when I learned that Champlain, low on funds, arranged himself this marriage to the daughter of a fellow-soldier, who was 12 at the time, so he could use her dowry to invest in his various New France ventures. She was so young that the marriage was not consummated until she was 14 and she still lived at home with her parents. I was appalled, of course. The biographer did not spend too much time in discussing Hélène but what was there was fascinating for all that it didn't say-- for instance, that it took a few years before she decided to visit her husband in Canada, and that she spent a lot of time in the Algonquin communities, that Champlain missed her so much that he named "Isle Sainte Helene" after her.

I was also interested in the idea of re-translation. That is, a Chinese poem that had been translated by Pound, and using the form of Pound's poem as stepping-off point for a Canadian story, that has its roots in France. And rather than the wife awaiting her husband's return in Pound's poem, in mine, it is the wife's departure that leaves a sense of renunciation and vacancy in the poem.
---
PHOEBE WANG is a poet and educator based in Toronto. Her debut collection of poetry, Admission Requirements, appeared with McClelland and Stewart in Spring 2017. She is the author of two chapbooks and her work has appeared in Arc Poetry, The Globe and Mail, Maisonneuve, Ricepaper Magazine, and THIS Magazine. She teaches ESL and currently works at Seneca College, and has also facilitated professional development for writers of colour. More of her work can be found at www.alittleprint.com.
ekphrastic poetry history Li Bai Li Po persona Phoebe Wang