I COME TO POETRY WITH CUPPED HANDS: In Conversation with Phoebe Wang 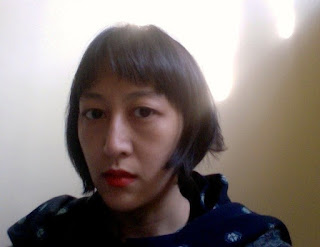 Every few minutes a drone over my left shoulder causes me to look up from the hammock, where I've received multiple mosquito bites while immersed in Phoebe Wang's lyric poems. The drone is bigger than a mosquito: a hummingbird, perhaps attracted by the red strings slung between trees, or the open throats of daylilies. It hovers as though still, as though watching; maybe I've set myself up in a nest zone.

The physical world grounds this poet's work; details are precisely observed and energy-of-being lands on the page in orderly, measured language. We spoke during the summer about foundations, stillness and movement, and what comes next.

SUSAN GILLIS: How did you first come to poetry -- or it to you?

PHOEBE WANG: I come to poetry with cupped hands. I also come to poetry with certain habits of mind and routines, in that I have come to rely on poetry as a means to achieve, not an epiphany or even clarity, but a way through a moment of bewilderment or doubt. It's not as though the poem should make an order out of chaos, or even navigate it. It has just become my preferred method for living with, and learning from the conundrums and ironies of everyday living. I no longer question if it's the best method or the most effective one.

Poetry came to me as a child through the seasons, and metaphors were a kind of puzzle or game that distracted me from family tensions. As a teenager, I relished the internal logic and world-setting of poetry. In university, as I took notes on lectures on canonical works and critical approaches, I felt compelled to write poems in the margins. Gradually those cramped lines grew and demanded their own blank terrain.

Poetry comes to those with almost unnatural patience. It is unnatural to be so still and to ask so little, because I clamour for beauty, expression, control, order, and resolution. Poetry works against all of those things. I can give the poem the appearance of desirable elements but the more order and beauty it has, the less of a poem it is. Poetry can come the way a scent comes to a sharp-nosed animal, who depends on its instinct to avoid becoming fodder. It comes like a warning or a lesson that is being shown to your repeatedly until you either grow or you perish.

SG: This notion of poetry working against patience, or stillness, must be one of the things that underlies your poems' tension and freshness. Some of my favorite moments are those in which the physical lifts into extended metaphor, as in "Jack Pine."

In one of a handful of garden-related poems, you write of "the art of cultivating discipline." There is something emblematic about this expression relating to your work. In "Visiting Relatives," you reach out: "let me take you on a journey...." How do these two impulses, the cultivation of discipline and spiritual tour-guiding, move together as you write or think about poems?

PW: The impulses of stillness and movement in Admission Requirements are both relative to the viewer and the act of observing and viewing. For instance in the garden poems and the plants-as-extended-metaphor poems, the landscape may appear static from the stances of the viewer, but in fact is an accumulation of many decades, even centuries of activity that is still ongoing. Unless we inhabit that landscape, we're essentially always a guest or a visitor, and I wanted to capture that tension between what we can only perceive in the moment and the long process and history of cultivation and survival that can be hidden.

In poems like "Visiting Relatives" or "Regional Transit" or "Night Ferry," the visitor is viewing the landscape while moving, but there's a similar tension at work, where the viewer/visitor appears to be moving forward in space and time but in fact may not be going anywhere at all -- or may be in fact spiritually regressing.

While I dislike the attitude of "ha ha, isn't that ironic", I have to admit there's a lot of understatement and situational irony in those lines that you quote. Can discipline be deliberately cultivated? The real art seems to be the ability to trick oneself into thinking that it can be. Similarly, is going to the suburbs to visit relatives a spiritual "journey?" It depends, as everything does, on one's specific context and comfort level. I'm interested in journeys that don't necessarily take us further away from what we know, but further inwards.


SG: What's inspiring you these days?

PW: The image of the female artist at work and the spaces she is working in. In the film "The Time Traveller's Wife", the husband is always vanishing and this seemed to me very apt. What if instead of the male artist as a locus, it's the female artist/creator who is the centring artistic and cultural force, the one who gathers family and community around her?

As well, iron age farm implements, the feelings of 9th century peasants as they looked up at the crumbling grandeur of Roman bridges in early Britain, sets of "berserker" chessman, cloth shoes handmade by Chinese women, ingenious ways people make lanterns from water bottles in areas without electricity. Being inspired, I think, is more about entering a frame of mind than sousing out an elusive state. It's trickier to re-orient myself to the source of inspiration so I'm not always leaning on the same way of viewing the world and same set of poetic approaches. It would be wonderful if after the completion of every book or project, the poet could change physically-- grow fur or an extra eye-- so that we'd be forced to move in the world in an unfamiliar way.
PHOEBE WANG is a poet and educator based in Toronto. Her debut collection, Admission Requirements, appeared with McClelland and Stewart in Spring 2017. She is the author of two chapbooks and her work has appeared in Arc Poetry, The Globe and Mail, Maisonneuve, Ricepaper Magazine, and THIS Magazine. She teaches ESL and currently works at Seneca College, and has also facilitated professional development for writers of colour. More of her work can be found at www.alittleprint.com. Read her poem "The Child-Bride: A Letter."
childhood Conversations feminism Phoebe Wang place