FLARES OUT OF CRISIS: DARREN BIFFORD IN CONVERSATION 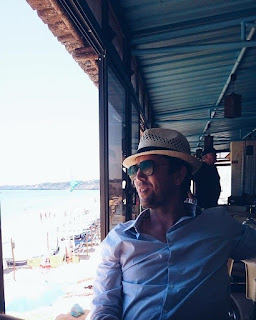 It might have been the Athens Restaurant in Halifax where I first met Darren Bifford, deep in conversation with a friend I'd gone over to greet. Or it might have been in Montreal, at The Word Bookstore (for everyone eventually turns up at The Word). Or maybe some other realm entirely.

SUSAN GILLIS: What first brought you to poetry?
DARREN BIFFORD: It’s surprising to me that I became interested in poetry at all. I grew up in a small town in Western Canada where there wasn’t much by way of culture. I have a memory of my ninth grade English teacher laboriously attempting to explain the difference between a metaphor and a simile. Still, some cultural scraps ended up within reach. My grandmother ordered this four cassette series of Beethoven, Brahms, Mozart and Haydn which I do not recall anyone ever listening to. I was interested in this music in part because it seemed so out of place.
The same, I think, happened with poetry. We had a teacher of English Literature, Murray Johnson, who exerted an incredible influence on some of his students. He was a big bulldog of a man with a baritone voice who always wore a blazer and tie. He’d walk slowly down the halls of the high-school, head down, either thinking or attempting to block out the noise of teenagers. I was terrified of him and dreaded twelfth grade mainly because I’d be in his classes. Naturally he turned out to be a wonderful teacher, full of humor and compassion for his students. He taught us Chaucer and Shakespeare, Milton, and the Romantics, reading aloud from his beat-up Norton that he’d kept from his university days. He took those poets very seriously, very personally. He argued with them and I recall that he once wished that Tennyson would have died instead of Keats—a remark he apologized for the next class, as if he’d said something truly horrible He was mostly angry with Milton, whose poetry he loved. He also loved Charlie Mingus. I owe to him my first experience of a serious desire for literature. The desire itself is most important—I barely understood any of the poetry.
That still seems the case now. Desire—that mix of poverty and eros—is what really matters.
When I began university a few years later I was lucky (or unlucky) enough to walk into Jan Zwicky’s philosophy class. Her influence and the influence of the other poets living in and around Victoria in the mid-to-late nineties was more direct. Al Purdy was alive and active, so was PK Page, Pat Lane, Don McKay, Robert Bringhurst. I was in awe of them all. I also had a teacher, Luke Carson, in English, who was terribly generous with me. He turned out to be a great reader of John Ashbery. Also, despite the fact that I studied philosophy, I was (competitively) moved by a lot of the young writers at UVIC who were around in those days: Steve Price, Esi Edugyan, Billeh Nickerson, Brad Cran, Tom Powell, Matt Rader, Rhian Cox, Spencer Maybee, Joe Denham, Jill Wigmore, Jenny Goth, Gillian Jerome, Bren Simmers, Melea Acker. I also came to meet some of the painters of the recently-dissolved Chapman Group: Jim Gordaneer and his son Jeremy, Mark Laver and Lucia Sanroman. I list all those names because twenty years have passed and it all feel like elegy already. Poetry happens to me because everyone else. It was a cool time.

SG: Your poems often import scenes and situations, also people, from a classical world into real time, real life contexts. I have the sense you are wrestling with them as real living entities. What are the compelling quarrels or quandaries? Do we have any hope of learning from the past – is that even a reasonable aim? Or is the past already us?
DB: Walter Benjamin writes somewhere about images / scraps of the past flitting by. He says that the critical historian is always sensitive to and in pursuit of those scraps, attempting to seize them. The same holds, I think, for a certain kind of poet.
It’s worth saying again that poetry is a way of comprehending one’s own life and time. That means pretty clearly that a poet worth reading ought to be historical sensitive, and alert to historic analogies with his or her present circumstances. I don’t mean that we all ought to be scholars or go about reading huge texts; I mean that the lyric impulse, which aims to launch itself outside of history, is in my own case tempered by a historical burden I’ve felt obliged to take on.
In another less heavy sense, I’ve always believed that the entities which populate our imaginations exist independently of us, like devils and angels exist. Literature establishes contact with these beings and, when I write, I keep my poem open for any of those “figures of the imaginative past” who might wish to show up. Practically this means that I’m increasingly unafraid to import and alter lines and images and rhymes from old poetry, and to do so explicitly.
I think of this differently than using “found text”, as if I’ve sought out the text and then integrated it into the poem. Here the encounter occurs in the act of writing the poem and seems to me not extraneous to the creative act as such. So: “wine dark ocean” is, of course, Homer, and hence violence, exile, the desire for home; it’s Ezra Pound’s translation in Canto 1, and hence his noble and stupid Cantos, etc. I want all those allusions. I have also attempted in these poems to retain and exploit an elevated diction, using the Latin / Greek root instead of the Anglo Saxon one.
Finally, the “quarrels” you ask about and which continue to be compelling are just the same as ever: love, grief, death, power. Having a child had this unsurprising effect on my life: all the clichés are true; we haven’t solved anything; I’m going to die. And so: how not to panic. The poems are flares out of that crisis.

SG: What's inspiring you these days?
DB: Inspiration is part of creation; it’s probably best not to talk about it. So I’ll take your question as one about influence rather than inspiration.
The other day I picked up from my shelf Adam Zagajewski’s essay collection, A Defense of Ardor. I’d read it close to ten years ago but I’ve not returned to it since. I noticed I’d marked a paragraph which seems now to have very much characterized the (almost always ill-formed) intent behind my work: “Along with his traditional labors, the writer’s pressing task must be the weighing of these two components, the discovery of new forms of evil, new varieties of good, new forms of behaviour and ageless ways of life. The writer evaluates the world, always a little new, always a little old, both archaically the same and changing under the invasion of the ‘modernity’ that now sheathes the world like a layer of shining nylon, even though not so long ago it had been traumatized by the convulsions of the thirties and forties, partly under the influence of the same modernity. The age’s great intellectual labor is still chiefly the comprehension of the twentieth century’s vast tragedies. Is there a place for poetry in this labor?”
All that is a bit—a lot!—grandiose, perhaps; it’s also conceptually sloppy (new forms of evil? modernity as a catch all phrase?). Still, Zagajewski, like Czeslaw Milosz before him, sets the lyrical impulse against historical reality; as a result there’s a moral dimension to their work that has infected my own sense of what I wish my poetry to be. So I’ve been attracted to those poets of the 20th Century in whose work I could discover a moral stay against the overwhelming maw of our recent history. W.H. Auden is crucial for me. As is Robert Lowell, Milosz and, recently, Joseph Brodsky. I’ve returned to the Greek and Roman classics over the last few years, as I have turned to more reading in history proper. I get a real pleasure from Gibbon’s prose. Tony Judt’s books and essays almost cured me of poetry entirely, and Timothy Snyder’s Bloodlands was a serious assault on my capacity to get through the day. In response to their work I’ve returned to reading Jacque Maritain, Leo Strauss, Simone Weil and George Grant. I do all this unsystematically and poorly. (It’s a good thing that poets don’t have to be scholars).
Occasionally I want to write a poem and so I sit down and try to write a poem. I’m happy and relieved when I do so and I discover that some of what I’ve been reading has managed to shape the poem in cool ways. It’s almost always unintentional. That’s almost my entire poetics.


Darren Bifford is the author of Wedding in Fire Country (Nightwood Editions, 2012) and Hermit Crab (Baseline Press, 2014). His next book of poetry will be published with Brick Books in 2018. He lives in Montreal.