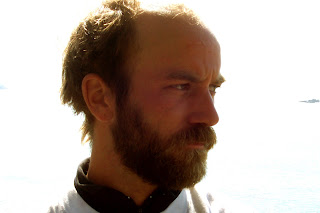 Gabe Foreman makes poems that render little secrets in image and music; they often turn corners into the unexpected: streets, parks, neighbourhoods, backyards and byways of the adventuring psyche.

SUSAN GILLIS: How did you first come to poetry?

GABE FOREMAN: I think that the writing of poetry first came to me on a school bus. When I was a teenager, I used to ride one of those big yellow buses with a friend and neighbour who went to a different school. She had been given an assignment to write a handful of love poems for her English class, for Valentines Day. When she asked me if I would write the poems for her, I agreed. I can't remember the content of the poems very well, but I do remember that it was liberating to write poems as somebody else. I had written things for my own courses, but something about ghost-writing poems for a friend made the process more relaxed, and more fun. I wasn't trying to make them too good, and that probably made the poems better. If I remember correctly, I think we got a satisfactory grade.

In terms of reading poetry, I remember enjoying the mix of darkness and humour in poets like Leonard Cohen, and T.S. Eliot, that I was assigned to read for my own creative writing course. I liked the darkness, and the surprising imagery, and the rhymes.

SG: I'm interested in what you say about ghost-writing -- not exactly in the voice of a persona, more like you-not-you. Do you still write this way? Is it one of the necessary conditions? What else have you carried forward from those formative experiences with poetry?

GF: I think that the 'you-not-you' observation makes sense. There is a personal core to a lot of what I write, but I'm more than happy to change the terms of the argument in the original draft for the sake of humour, imagery, sound, or some other aesthetic goal. I feel like the 'truth' of the original experience remains in some form, and the reader can detect it. Maybe that's false, but I think that starting poems from real experiences, or from ideas that I care about, makes a difference in how I write a poem, and adds an important element of contrast to the end result. Is the poem serious or is it a joke? I like absurdity and humour, but I feel like my favourite humour has a current of some 'serious' experience running underneath it, muddying the waters.

In 2003, I was at a talk by Margaret Avison where she said that when she was three years old, she went outside with a toy shovel to play in her sandbox, but was disappointed to find that the sand had frozen solid because winter was coming. No one had told her that the sand could do that. She told us that the devastation she felt at that moment was as real as any devastation she had felt since. Emotions do not age, she said. I thought that was wise and interesting and tried to apply this general principle to my first book. I wanted to keep the emotive core of the things I write about, the truth of the emotion, but play around with the surface details.

In A Complete Encyclopedia of Different Types of People I tried to deploy a lot of vaguely universal places, nameless cities and lakes, so that the action was potentially taking place anywhere. I broke that rule more than once, and named specific places, but I wanted to use a host of generic Dick-and-Jane sort of names, so that the characters were somewhat interchangeable, cardboard cut-outs of you and me, on the assumption that our similarities may outweigh our differences. We've all experienced grief, love, disappointment, etc. A lot of the silliest poems in A Complete Encyclopdia are actually kind of personal. I write about failed and successful friendships, love, anger, insecurities, ideas, and more specifially, about my father's suicide, but I like to change things and have fun with language. I've changed names to protect the reality, to mimic encyclopedic objectivity, and at the same time, to poke fun at that objectivity. It's me, but it's not me.

Gabe Foreman grew up in Northwestern Ontario. His first collection, A Complete Encyclopedia of Different Types of People (Coach House, 2011) was awarded the A.M. Klein Prize for poetry, and was shortlisted for the Concordia First Book Prize. More recently, he has read several poems as an on-air guest at the CBC Montreal morning show, Daybreak, and illustrated two books: Halifax Hal, by Nick Thran (Bayeux Arts) and The Rude Story of English, by Tom Howell (Random House). Gabe lives in Montreal where he manages a soup kitchen. Read his poem Mammoth here.