So Awesomely Cheeky: In Conversation with Linda Besner 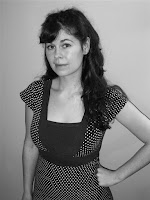 I met Linda Besner when we read Tolstoy out loud together one autumn in a small group. Things would bubble up through her reading: undercurrents in dialogue, subtle complexities of society and politics. We'd forget it was snowing, or late, or that we had work yet to do. That the same ebullience turns up in her poetry and her talk is not the least bit surprising, and a great delight.

SUSAN GILLIS: How did you first come to poetry—or, if you prefer, how did poetry come to you?

LINDA BESNER: I didn’t get exposed to poetry much in school, but when I was a kid my family had a tonne of British story tapes—Wind in the Willows, Winnie the Pooh, Peter Pan—all read by actors. I think I got a lot of my interest in prosody from listening to those recitations over and over.

Then in Cégep I got interested in the Greeks—I still have my little copy of Richmond Lattimore’s translation of Greek Lyrics with notes from when I was seventeen—“Opposes the heroic view of ‘Come back with your shield or on it’” and “I made it, screw the ideal.” Those are on Archilochus’ fragment 3:

Some barbarian is waving my shield, since I was obliged to
leave that perfectly good piece of equipment behind
under a bush. But I got away, so what does it matter?
Let the shield go; I can buy another one equally good.

I think I was attracted to pieces like this for how direct and immediate they feel—there’s still something neat to me about being able to hear someone’s voice so clearly thousands of years later.

And it’s so awesomely cheeky! The ignominy of “under a bush” kills me.

SG: Voice, comedy, tragedy, their inter-relation--these elements are at the forefront of your work, at least in my reading of it, carrying me further into each poem. Is there a cast of characters bumbling and/or gliding through the poems' worlds, a dramatis personae through whom someone (perhaps you) is speaking, or something more like an omniscient maker, setting up the funny-odd, funny-ha-ha worlds your poems stage for us?

LB: I’d say the latter. Some of the poems are set up as dramatic monologues (like Bathtub Showroom, which takes on the voice of a bathtub salesperson) but it seems to me that the personae of the poems are all essentially disguises, a set of false beards that barely hide the winking chin of the omniscient maker, so to speak. In that bathtub poem, the salesperson is him/herself making up characters—“A basin readymade for little Jim’s tadpoles, or Auntie Jean’s/ homemade gherkins”—who are themselves wraiths meant to conjure, half-sardonically, an ideal family life.

I think none of the speakers in this book are anything I would call real, even those closest to myself. I’m interested in the ideas and feelings that pull against each other, and this interest tends to militate against cohesion or consistency in the poems. At the same time, I hate the idea of randomness and meaninglessness! So I think the tragicomic note you’re hearing is me struggling to reconcile a seemingly cruelly random world with my own need for order and structure. If there is an omniscient maker of these poems, that speaker is still not omnipotent—-you can know a lot without being able to control much of anything. So the extent to which the maker can set up the world of a poem is limited by the inherent contrariness of reality and of language. I wouldn’t say that my poems stage a weirdness, exactly—I think the materials of life just *are* quite weird. The absurdity that reads as funny isn’t something that I’d say I go in search of—-it’s something I’d say I’m perpetually trying to wrestle into some kind of sense. I don’t see being funny as an end in itself.

LB:  I moved back to Montreal a year and a half ago (I'm from Quebec but have lived in New Brunswick, BC, and Ontario over the past 15 years or so), and being back in a francophone environment is pretty great. My French is far from perfect, but being reminded that I have access to a whole second language as well as a separate set of historical and cultural references is a huge boon.

I essentially want to answer this question like I'm listing Oprah's favourite things of the month: Crayola markers, Nancy Mitford, kites, street signs, Heather Christle, cucumber water, the LRB, the coming environmental apocalypse. Those are essentially all hovering, psychically or otherwise, on or near my desk right now. As well as a bunch of books in which I have been searching fruitlessly for guidance on journalistic ethics--seriously, I kind of wish there were some sort of exam you had to pass before they let an idiot like me go around reporting on other people's lives. I'm not sure if "inspiring" is quite the word, but I am awake at night thinking about that a lot--what the ethics are of my choosing to write about certain things, either as a journalist or a poet. Especially because (with poetry) I've recently been using text that I see in ads or online as a departure point, I'm aware that people who blog or otherwise post their thoughts online don't always understand the ramifications--that someone like me could come along and use their text in a way they didn't intend. I do it in a way that's legal, but is it fair? Does it matter when it's pretty much 99% certain that the person who wrote some tag line for a travel ad to Aruba will not see the poem I've written that uses their line as a title? What about if it's a line from a personal blog? I guess I'm wondering these days how I can write about what interests me--which is often, frankly, other people's experiences and generally a lot of things that are none of my business--without being a jerk in some respect.

Linda Besner’s first book of poetry, The Id Kid (Véhicule Press) was one of The National Post’s Best Poetry Books of 2011. She was a 2013 MacDowell Colony Fellow, and her poetry and non-fiction have appeared widely, including in The Walrus, Maisonneuve, The Malahat Review, Hazlitt, and Best Canadian Poetry 2012. She lives in Montreal where she works as a journalist. Read her poem Paris in the the Spring here
Conversations Linda Besner