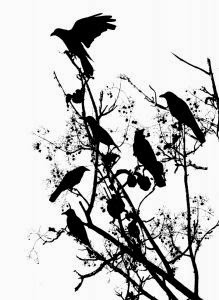 BALUSTRADE
after “Utopia” by Lisa Robertson

In spring, a century buckles, pressed
into rusting bed frames, prosthetic legs,
and confused, windswept architecture.
The crows are an accidental beauty.

In autumn, the world was no longer
a phosphorescent empire, fragile
and finite. How simple the future is.
Everything already exists. The tree.

The sky. The elegance of the balustrade
in the hot, thin air. The little island
of beaches ringed in purple fields.

Beneath the structures, the summer
weeds deepen. In dry leaves, the remains
of a fallen figure — she was already ruined.

Paul Vermeersch is the author of several poetry collections, including the Trillium-nominated The Reinvention of the Human Hand (M&S, 2010) and Don't Let It End Like This Tell Them I Said Something (ECW, 2014). He lives in Toronto and is Senior Editor for Wolsak & Wynn.
Lisa Robertson Paul Vermeersch Poets & Poems