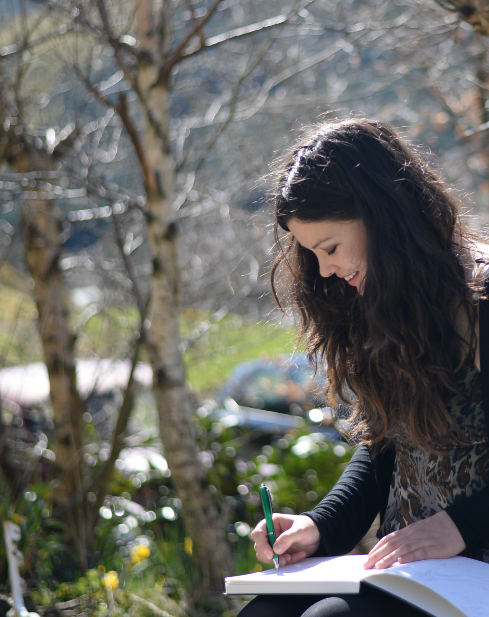 It's minus-25 and stormy in Newfoundland. We're in the last leg of the week-long March Hare festival of words and music, the ice so thick on the ground you can't walk anywhere, not even to the nearest Tim's, but Welsh poet Jemma L. King is far too busy observing the details of this strange new place to even shiver in her entirely-inadequate faux-fur jacket.

JEMMA L. KING: I’ve always loved wordplay and when I was small I’d borrow limerick books from the school library. I loved memorising them and reciting them to my dad, who found them as funny as I did. But by the time I was a teenager, poetry had become so dull. In school we went over and over “The Passionate Shepherd to his Love”. All this twee pastoral rubbish. I had no idea of the explosive potential of the medium – that it can just hotwire you to somebody else’s consciousness. That came later, in two formative leaps. Firstly, there was Keats, whose masterpiece Lamia had me drawing all sorts of weird abstract creatures in my notebook as the teacher read it to us. So the floodgates of Romanticism opened to me with all of its myths and politics.

The second important step was Sylvia Plath. We didn’t have one female poet on our syllabus – ever, so I made it my mission to find one. One lunchtime, I crept into the English room and found a dusty pile of copies of Ariel at the back of the room. I took one home and discovered that I actually had a latent (but totally buried) understanding of how we all connect to one another and the world around us, but nobody had articulated this to me before. Suddenly, everything that had gone before was questioned and challenged. I tried to work my own way into the white space that constitutes normal life. I tried to get in-between the atoms in the way that Plath does so elegantly. Suddenly I understood so much more, and yet had about a hundred million questions. It felt spiritual, like speaking to God.

SG: Your new book centers on Victorian pornography and the act, and art, of looking. Folded into this are considerations of how we look, in both senses: the act of looking at anything, and the self-consciousness of how one appears to others. There is also the matter of seduction, of tensions between what concealed and what is revealed. The word “play” comes to mind, in that sense of a space for movement between opposing points. Could you talk about how these ideas play out in the poems?

JLK: Seduction and play are key to the new volume. The Undressed is, as you say, based on a cache of antique pornography (and risqué photographs from the period that were not necessarily pornography too), so I’ve had to account for their original intent. That’s honestly very difficult because I know some readers will want as much sex as is humanly possible. That is why they will buy the book. Others will be like, “God, enough of the sex already. Who are these women?” So it was a fine line and I was always fluorescently aware of it. But I wasn’t drawn to the surface layer initially. I was drawn to the anonymity of the women. Who were they? There is tragedy embedded in these photographs but a lot of that it projected. They make us sad simply because they are dead. But they might’ve been having a ball at the time. My approach was to “listen” to them in the same way that Alice Walker claims to have listened to the characters in her seminal novel, The Color Purple. It was almost clairvoyancy. I just sat there asking the photograph “who are you? What’s the context to you being here?” After collecting all my primary research I went to visit a historian to further narrow down what I’d discovered. I was quite spooked by some of what he had to say as I’d guessed almost precisely who this person, or that person, was. Betty Blythe, a forgotten silver screen actress, was amongst these. Finding her was like the proverbial needle in a haystack and yet it was as direct as water dousing, I unpeeled several layers of history without trying, I was always led in the right direction. I can’t explain that.

But getting back to your point about “self-consciousness of how one appears to others” – I was initially inspired by a stand of Victorian pornography on a street in Paris. The shapes of the bodies was, for me, the fascinating detail. These women were almost exclusively pear shaped, some quite exaggeratedly so, and yet that is the exact opposite of our physical aspirations as women today. It made me think of a lot of complicated socio-political things, such as the role of plastic surgery and how it sculpts young girl’s perspective on how they should look. And of course, what is, in its natural state, the female body? How should it look? Are we so far removed from nature with our over-saturation of body-fascist media that we don’t know what we are supposed to look like? I think whether you are bothered by your physical appearance or not, we are all victims of this fascism, especially in the era of social media in which prominent women get ripped apart for not participating in this idiocy. There have been some high profile cases of this in the UK and I can see, on the back of that, that another wave of feminism is breaking and boy is it overdue. The women in these photographs look so carefree in their “natural states”. They are not pouting or narrowing their eyes in faux-sexual arousal in the same way that women uniformly do now in everything from cat-food commercials to selfies. God I hate selfies. No, the women in these antique photographs are smiling. Well, mostly.

SG: What’s inspiring you these days?

JLK: The world! I’m on the road quite a bit these days and I usually come away from a country or city with new material. Landscapes that are alien to me inspire me a lot because I’m trying to relate to them, understand them and the people that inhabit them. I’ve recently come back from Canada/ Newfoundland, and the extreme wildness found its way into a poem, “Edith”, that is in my new collection. I’ve used my Newfoundland jottings to explore the perspective of a woman on this side of the Atlantic who is waiting for her husband to return from overseas. The village that my mother’s family comes from has a cemetery with so many empty graves because the men who should be in them died overseas. I’m from that sea-faring tradition so I named the poem after my grandmother and she is the woman in the poem, but the poem came directly from my Newfoundland experiences. Also, I’m writing a novel at the moment and certainly the European-wide swing to the far-right, and additionally the increase in misogyny – those two things are staying at the front of my mind when I’m writing. I write about things that I feel need addressing and these two developments are a constant source of concern, and therefore, inspiration.


Jemma L. King is a poet and critic from the UK. Her debut collection, The Shape of the Forest, was shortlisted for the Dylan Thomas Prize, the Wales Book of the Year Prize and the Roland Mathias. In 2011, she won the Terry Hetherington Young Welsh Writer of the Year Award. Her second collection, The Undressed, is due to be released at the end of June 2014. https://twitter.com/JemmaKingPoet
Read Jemma's poem "The End" here.
Conversations feminism Jemma L. King Newfoundland our times Sylvia Plath