In Conversation with Anita Lahey 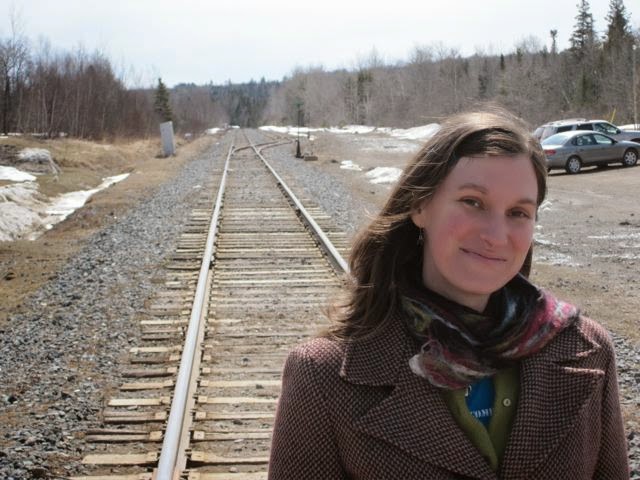 A meeting for coffee extends over lunch. Or an afternoon  swells into evening. However it happens, it takes only a few minutes in the company of Anita Lahey to recognize a deeply attentive writer at work fusing stories, situations, questions, and more. I caught up with Anita recently between stops as she toured with her new collection of essays, The Mystery Shopping Cart.


SUSAN GILLIS: What brought you to poetry in the beginning—or, if you prefer, what brought poetry to you?

ANITA LAHEY: Adolescence, a bossy (and insightful) friend, poor eyesight, Dennis Lee and Lewis Carroll, the fantastic concept of onomatopoeia (which I can still never spell without the aid of a dictionary), maybe some innate & insatiable need for language with rhythm and beat. I don't exactly know. When I was a teenager my best friend and I used to write poetry together, I mean literally co-write poems. We'd also share poems we'd written on our own, and though at first they covered the usual ground (family woes, heartache, homework), mine began to veer into other territory: extreme alliteration, character study, family history, even politics. One day she declared I was a poet. She started sending mutual friends my way so I could translate their broken hearts into verse. For a brief heyday, I "worked" lunch hours as a scribe of star-crossed teen love, interviewing the bereft & taking notes for poems I would compose late at night, in the privacy of my bedroom. But: I think the delicious play in Lee & Carroll, perhaps even the Mother Goose rhymes I listened to on the record player over and over as a child, had already done their work. The first poem that I remember hitting me in the gut was about a person getting new glasses, and everything turning shockingly clear: the joy of this discovery, but also its unsettling side, the fact that you can get so used to blurred vision you stop noticing you aren't seeing what's before you. There's a metaphor to chew on! Someday I will really do a serious hunt for that mysterious poem and its author, and find out if its lasting impact on me is really deserved, according to my more experienced (and cynical) poetry-reading eyes. But whatever I think of it, if I do ever find it, I think I already know the answer. It's stayed with me this far. So even if it's hokey as all get out, I think it's earned some kind of stripe.

SG: Your poems are built on detail, colour, texture; they’re supple and muscular, showing the tenderness inside toughness, and vice versa. You’ve worked extensively as an editor and critic, too. I’m interested in how these various engagements with language and idea inform your choices as a poet: where do the journalist-you and the poet-you meet?

AL: The simple answer is that we meet in stories, and in questions: about people, issues, events, the nature of humanity, history, society. But where the journalist pieces together, as clearly (and as quickly) as possible, an outward truth or reality based on the facts, ideas and opinions she can glean, the poet takes those same ingredients, throws them in a pot, sets them on simmer for a good long while, and then takes a big sip. She waits to see how that spoonful settles. Then she starts to write. It’s not that the poem is going further, exactly. But it’s calling on an internal response—or responding to an internal reaction—that is different than that required for solid journalism. I find it interesting, and sometimes frustrating, that poetry in our culture is often casually presumed to be a sort of artsy, flighty pursuit, where something like journalism is considered more disciplined and serious (well, OK, the kind of weighty, well-researched journalism we used to hold in high esteem!). They’re different crafts, with different aims, but both (if done well) require rigor, and for me, anyway, stem from a related impulse, one you broached in a recent post on Concrete & River: the need to bear witness.

I was thinking about this after reading your interview with Sue Sinclair, and her elegant discussion of the lyric moment. I get that effort she’s making, to engage the lyric possibility that is always present—and I see it in her work—and I have tried to engage it too. But not as dutifully as she. I think what I’m more wed to, moreso than the integrity of the moment, is some combination of narrative, character and consequence. And beyond that, a combination of these elements that carries a visceral charge. I can’t tell you why, exactly, except that it’s what I need to delve into. It's also often what works for me most powerfully as a reader—and that notion, that something “works for me,” is why I’m always wary in the critic’s role, and of the assured and authoritative tone often adopted by critics, because my time as an editor especially has taught me how personal and widely varied responses to the same work can be. That doesn’t mean I don’t believe in things like skill, sloppiness, middling efforts, brilliance. But it means that, beyond a certain level of quality, I can only but acknowledge that taste muscles in. And I believe it has a right to–we are all of us individuals, after all. Why shouldn’t there be different forms and styles of poetry to speak to and engage our different natures?

Back to me and the visceral. When I encounter a poem that engages the mind over the senses I really have to force myself to pay attention and work my way through it, even if it’s a brilliant piece of writing (and thinking). I need to feel a thing I’m reading to really become involved with it, and in that way I sometimes have the sense that others would consider me rather old-fashioned, or traditional, or, I don’t know, soft. That needing or wanting to “feel” is a kind of weakness in our post-post-modern era, or whatever this is. But it doesn’t feel soft to me. When I read, I’m braced to take in the full force of the mysteries of our existence. I want to be kicked in the gut, and when I write, that’s what I’m aiming to hit. Not the mind, not the heart: the gut. That doesn’t mean the mind and heart aren’t involved; they’re entwined, actually, rather than one or the other dominating. When I read something really powerful, the sensation is physical, like being bruised. It’s also—to slightly shift metaphors—as if I’m getting oxygen to starved cells, as when you stretch a painfully tight muscle. That oxygen literally feels like light.


SG: What is inspiring your writing these days?

AL: I'm going to be a bit difficult! I don't know if "inspiring my writing" is the way I think about what happens when I sit down to write in a certain vein, or on a particular subject. I think it's more like I'm worrying a problem, or trying to understand why something is following me around, what is going on there that's so compelling or so insistent on having my attention.

Right now, in part, that thing is a fire that happened in my father's village in Nova Scotia when I was a small girl. We were living in Ontario, and though no one there was hurt in the fire, my grandparents lost their home to it, as did many of their friends and neighbours. It haunted me from the start. I wrote one of the very first poems I ever recall writing about this fire and its impact on the village - sometime in later elementary school, when were given an assignment to write a poem that scanned.

Obviously that stilted poem didn't purge the fire from my system! That such a faraway fire had such an impact on me leads to questions about its legacy for those who lived through it, the kinds of questions my writing mind can't resist asking.

Right now, I'm collaborating with my friend, the visual artist Pauline Conley, on a graphic poetry project that draws, in a fictional as opposed to a purely factual way, on the lingering tales and memories people have of that fire, and the sense of legend (at least in my own mind!) that surrounds it. Given the fact that wildfires are becoming more common, and more devastating than ever, in various parts of North America, it feels like a relevant place to be. And as Pauline and I are discovering, fire is a powerful force, not just in real life, but in the imagination. Which I guess partly explains my lifelong fixation with this particular fire.