The Slow Animal of Silence: Reading Emily Dickinson on the Winter Solstice 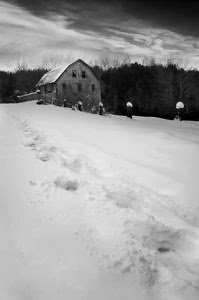 While it isn't exactly about the winter solstice, this poem by Emily Dickinson locks down the wintry silence that comes after a storm, a stillness that contains only the slightest shifts. It's this felt but not seen movement of heat, of life, that links me to the solstice moment, as the solar year turns toward longer, warmer days.

At the beginning of this short poem, we are outside a house after a storm, on a street that has been scoured by wind and snow. The house is battened down, but not quite perfectly; birds have gone into hiding; silence has moved in and occupied the whole place. By the poem's end, we are -- at least in our imaginations -- in the snug shelter of the cellar, where apples and presumably other foods are stored.

The rhythmic pattern is very balanced in this little 11-liner: a tense, regular beat of two-two-three, two-two-three, two-two-three, four-three, the tight rhyme on the end of each three-beat line making the final slant rhyme strange and enigmatic. As always with Dickinson, strict sound play gives room to potent and unusual ideas. The house is "hooked"--what? By the storm, or against the storm: it's not quite certain. Where we might expect to be comfortably observing things, wrapped up in an extra sweater, the storm gets its hooks in; meanwhile, out there in the cold, the sun sends out faint warm drafts as "deputies," representatives of the greater warmth inside, and the greater warmth to come later in the season. Do we feel these warm drafts, or just imagine them? Dickinson creates the environment and places us in it, bestowing on us the gift of heightened senses.

But what about this ample Steed that belongs to Silence? The word steed suggests spirit and swiftness, yet this Steed, in addition to being ample, generous, is plodding, that is heavy of movement, laborious. I'm not sure what to make of this apparent oxymoron. Is it a soft place in the poem, a not-quite-right moment? Even such a fleeting hint of a lapse in the Dickinson oeuvre sends me back to the poem, to dictionaries, to awareness of my own ignorance, to try and sort it out. 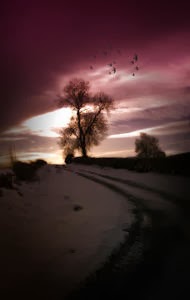 This is a workhorse kind of silence, a silence that overtakes by weight rather than speed, that goes everywhere the birds have been--that is, on the updrafts and air currents. The large, slow animal of silence moves in and takes over. What a conception! It is exactly what that post-storm feeling is like.

Meanwhile, in the cellar, in a basket of apples, one quietly shifts; look, says Emily, loosening the tension ever so slightly. The slant rhyme turns away from strictness, but toward what kind of play? How the apple is moving is in its slow decay.


A Page from My Notebook Emily Dickinson On Reading